Last week, Bella Thorne released her own nude photos after she was hacked and blackmailed with them. Thorne posted them to show her hacker that she was not afraid of a digital bully.

Although most of her 19 million Instagram followers showed their support for her bravery, some were quick to judge her for exposing her body on social media. Whoopi Goldberg, co-host of the daytime TV show, The View, called out the former Disney star stating, “shame on you.” Since, Goldberg’s received scrutiny from celebrities including Zendaya, Lucy Hale, and Jake Paul for her disgraceful remarks. Why has someone criticized Thorne for taking power back from her blackmailers on national television?

A Need for Change

Slut-shaming isn’t new, in fact, women are 33% more likely to be on social media, than face to face. People tend to hide behind screens instead of making comments about others to them directly. This exemplifies the cowardice of hackers and trolls who think blackmailing celebrities gives them the upper hand. It takes strong people like Thorne to stand up for themselves to create change.

Thorne uploaded the pictures to show the world that the hackers have no hold over her. Instead of responding privately to Thorne, Whoopi slated her on national television for taking the photos in the first place. She claimed, “you shouldn’t have nude photos, especially if you are a celebrity.”

This isn’t the first time Goldberg has criticized women in the industry. In 2018, she commented on women in the #MeToo movement, claiming that “they slept with directors to get Oscars. And when they didn’t win, they cried assault.” Comments like Goldberg’s, which blame victims, are harmful to women. We should be telling young girls to take pride in their bodies and enforcing that harassment is not acceptable. Additionally, those who hack and blackmail must be held accountable for their actions.

Double Standards in the Media

This demeaning issue has been a problem in the media globally. It was apparent in an episode of Love Island, airing in the UK last week. Maura, a contestant on the dating show, was slut-shamed by her fellow contestants for being open about her sex life. She received a text towards the end of Sunday night’s episode informing her that she could take a man of her choice to the Hideaway, a private room as opposed to the communal living space. She chose Tom and proceeded to get ready for her romantic night away.

Regardless of Maura’s openness, there should have been no shaming about her actions. Before going to the Hideaway, Maura overheard Tom tell the other male contestants that, “it will be interesting to see if she is all mouth.” Maura rightfully responded with fury over Tom’s comment. After the episode, Twitter exploded with angry tweets from men and women about why the other contestants were quick to judge her.

One Twitter user said, ‘”Tom saying ‘let’s see if she’s all mouth’ about Maura because she’s open about her sex life is a prime example of how women are objectified for expressing liking sex.” Another said, “Honesty disgusted at both the boys’ AND the girls’ reaction towards Maura’s night in the hideaway. Being confident in her sexuality and able to speaking freely about it does not translate to being ‘easy’ and should not create any sort of expectation/pressure.” A woman should not be afraid to be confident about her sexuality, in fear of public ridicule. Women are not objects. Even if you don’t agree with how they express themselves, humiliating them in the media will not solve this global issue. Slut-shaming needs to be obliterated. 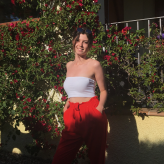 Mia is a 20-year-old student, currently studying Journalism and Creative Writing at Hertfordshire University. You will more than likely find Mia either with her head in a book or at Starbucks, indulging in a caramel latte. Her hobbies include short story writing and field hockey.

The Summer Breeze Makes Me Think of You: Summer Songs to Add to Your Playlist

Creating Welcoming Spaces For Women To Share Their Stories

Why We Need “Wonder Woman” Now