Time and time again people see the modeling and fashion world and are enamored by it. They see the size 00, seemingly care free models wearing thousands of dollars worth of clothes, and want a life just like that. The harsh truth, though, is that the modeling world is not as glamorous as it looks from the outside.

Models typically travel to large cities to try and break into the industry. Moving across the country, or world, leads to them relying on agencies or other advertised “model apartments” for inexpensive living. Often times, models are stuffed in these tiny, filthy apartments like sardines. Small 10′ by 10′ bedrooms, and sometimes even smaller, house up to 4 models and are not the best places to stay. As you can imagine having up to 8 girls living in an apartment can cause unhealthy and dirty living situations. In many, models don’t know the native language and are living with others they cannot communicate easily with. A model, who wishes to remain anonymous, shared that sometimes modeling apartments can be the loneliest place in the industry despite being so full.

Sometimes aspiring models go from casting to casting unsure of whether they will get a job. The competitive field can lead to models finding it difficult to pay for basic necessities, like food and transportation. Castings can be brutal; models may wait 3-4 hours to be seen by casting directors. In these auditions their bodies are the main focus of critique.

The focus on appearance is more prevalent in modeling than in other careers, commonly leading to body image issues and insecurities, including eating disorders. Models can be encouraged by agencies to have plastic surgery because their look isn’t exactly what the agency wants. Agents can put a lot pressure on their models to appeal to societal standards, which can be emotionally and physically damaging and nearly impossible given their natural appearance.

The harshness of the modeling industry isn’t evident in the final product, whether that be in an advertisement, commercial, or runway show. The glitz and glamour often covers up the living conditions and judgment that models face in the industry. Models are likely to have made sacrifices in order to achieve the “perfection” that you see in your favorite magazine. 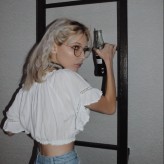 Taylor is a 19-year-old living in Los Angeles. If she's not working as a barista at Starbucks, she's probably scouring the nearest sales rack. She aspires to work in public relations either in the music or fashion industry. She's a lover of all types of music and sometimes her fashion sense is a little out there.

Why We Need “Wonder Woman” Now

The Return of the One-Piece Swimsuit