The story isn’t new: several dozen women make the courageous yet burdensome choice to speak out about the sexual harassment and discrimination inflicted upon them by a man in power months or years after the incidences take place. To the public, these claims appear to come out of nowhere, as women unite together through the commonality of their experiences and refuse to be rendered voiceless any longer. And then come the inevitable, senseless questions. Why didn’t she saying something sooner? Should we really believe her? Maybe she was asking for it? The newfound accusations made on film producer Harvey Weinstein are not out of the ordinary, and that should scare you.

Over fifty women, some of which include Angelina Jolie, Cara Delevingne, and Ashley Judd, have come forward this month about the assault, rape, and sexual misconduct committed by Weinstein. The celebrity of these women and the ardent feminist platforms that many of them enforce were still not enough to create comfort in speaking out. No amount of Hollywood prominence eliminates the systemic discrimination that comes with simply being a woman. We’ve seen the same story play out over and over again. Bill Cosby. James Toback. John Besh. Bill O’Reilly. The list goes on.

Women have found a comfort in silence because it allows us to remain unsubjected from scrutiny. It means we can be taken just a little more seriously for some undefined amount of time because delegitimizing one man’s authority instantaneously terminates our own. And so these men can continue to go about their lives, while the women they abused feel trapped. The world once again screams back at us that what has happened and what we have to say does not matter. Life is dictated by our choices. Small, big, beautiful, messy, uncomplicated, confusing choices. But those choices should always be yours to make. When you are put in a position in which you feel as though standing up for yourself will cause more harm than good, someone else is making your choices for you. That is never acceptable.

We saw strength in numbers as women opened up about their own experiences, using #MeToo and #YesAllWomen. I argue that it’s time for us to go beyond these trends. Yes, it is imperative that we have these conversations to prove that no act of sexual misconduct should go unnoticed. Even so, this shouldn’t stop when a hashtag loses salience. The moment we forget about the dangers that haunt women every single day is when we fall back into the safety of silence. We must all commit to being better for ourselves and each other. We need to consider the intersectionality of race, sexuality, and class. This is an epidemic that cannot be solved with apologies and empty promises. Let’s shift the narrative away from this desensitization. Starting today, we must make ourselves so unwaveringly vocal and unapologetically honest that we’ll never be confined by silence again. 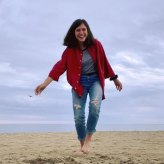 Christina is currently studying Public Relations and Political Science at Temple University. A native of Greater Philadelphia, she bears the self-proclaimed titles of Pixar connoisseur, concert junkie, and organizational goddess. She is a proud supporter of the feminist agenda.

Bad Suns on Growing Up, Disappear Here, and Touring