Joey Bada$$ is a 22-year-old rapper from Brooklyn whose first appearance in the rap scene was in 2012 with his mixtape, 1999. Bada$$ was known specifically for the way he would rhyme, which was impressive for someone so young. Coming into the rap game at the age of 17 is a lot for a kid, it can either make or break you. Joey seemed to handle it well. At the age of 22 he has secured his spot as a rapper to watch-out and wait for. Through the release of his newest album, ALL-AMERIKKAN BADA$$, the growth of Joey is shown throughout every lyric, beat, melody and sampling of his album.

Unlike other genres of music, rappers have never been afraid to use the political climate as inspiration for their music. For decades this has been the norm, From NWA’s F*** the police, to Public Enemy’s Fight the power, Kendrick Lamar’s Alright, and the 12 songs that Joey cultivated on AABA fit right in with the rest of them. This is known as ‘conscious rap’, defined as hip-hop that focuses on creating awareness and imparting knowledge. From the opening lines of AABA, “Free the mind, what’s freedom to you? / Let’s talk about it, take a minute, think it through / I’m all about it, but the concepts seems new,” Joey makes it known that this is the path he is taking with the rest of AABA. He has ‘awoken’ and wants to bring his audience on a journey of what it feels like to be a black male in America.

The term ‘conscious rap’ is something that weighs heavily in the hip hop world and culture. The audience wants music that means something, music that can take them through the ups and downs of being a black person in America and the audience clings to artists that give them this sense of belonging and similarity. However, a large majority of people consuming music just want something to forget their problems. They like living through the overly glamorized lives of their favorite artists and this really blurs the line between making products that sell to the masses and products that sell to the souls. AABA shifts the way that the consumer can identify with the artist. This was Joey’s first album with an underlining theme and no bonus tracks. Every song on the album was meant to be there, all telling a story about Joey’s experience and thoughts as a young Black man in America. AABA tells a story that will never be forgotten and has yet to end.

It’s hard to pick a favorite song from start to finish. AABA has lyrics that hit and stick with you. There was more than one moment where I had to pause mid-listen and make sure that I heard that line right or pause the music and really sit with what Joey was saying:

FOR MY PEOPLE – “Never restin’, I’m surpassin’ the expectancy / Of life in my direction / Man the section 8 depression’ / Hard to be progressin’ through recession and oppression / Not to mention that they had us cell blocked ever since an adolescent”

Joey is making music that is going to be here for a long time about things that matter to him such as racism and politics. He talks about being in section 8 (public housing) as a young kid, how it can be very depressing and doesn’t leave much room for growth in the low-income African-American community. He also touches on the amount of black youth in prison through mass incarceration.

TEMPTATION  – “Tell me how we gon’ shape this vision/ Complainin’ all day, but in the same condition/ If you wanna make change, it’s gon’ take commitment/ Some people enslaved by they religion/ Can’t emancipate them from the mental prisons/ What I seen through optics transform to wisdom”

Joey is talking directly to the black community. He believes that they all have a shared imagination and end goal for their future to help themselves grow, however, he believes that a lot of people in the community are just sitting around and complaining about their circumstances instead of trying to fix it.

LAND OF THE FREE  – “In the land of the free, it’s full of freeloaders / Leave us dead in the street to be their organ donors / They disorganized my people, made us all loners / Still got the last name of our slave owners”

This was the first single off of AABA where Joey emphasizes the ways in which those in power profit off the oppression of minorities. The oppression of black men and women through slavery and Jim Crow laws, although in our countries past, still haunts the black community to this day because of the last names that they carry from their ancestors oppression.

BABYLON – “Detached from the roots since we set sail, my brothers / That’s word to motherland, sold us on stolen land / Visions from brother man, he seen us all holdin’ hands / Fifty years later, still see my brothers choked to death / R.I.P to Eric Garner, only right I show respect”

In the beginnings of slavery, the Europeans took minorities away from their motherlands. Afterwards, the Civil Rights Movement was supposed to help stop any type of mistreatment of African Americans. However, Joey talks about how that isn’t the case by using the death of Brooklyn native Eric Garner as an example.

AMERIKKKAN IDOL – “We need solutions, you better start plottin’ now / It’s always been clear that they don’t value our lives / My people been sufferin’ way too long / And I’m tired of singin’ the same old song / People actin’ like this shit isn’t happenin’, it’s downright wrong / Justice won’t be served by a hashtag”

In the last song of AABA, I feel a final plea from Joey to the people listening to the album. He knows that there is a need for change in the way that his community and the people around the world take on their problems and the problems in society. He knows that the only way that we can change the world is to make a change in ourselves and the way in which we demand and receive information. He references that being an activist on social media isn’t enough.

ALL-AMERIKKKAN BADASS is an album that is on it’s way to being a Hip Hop and Rap classic. Joey isn’t afraid to raise the bar and let everything out and this is exactly what you get from this album. It is definitely going to be in my top albums of 2017 and probably in all time favorites for the rest of my life.

Joey’s newest album can be streamed here and found on his website! 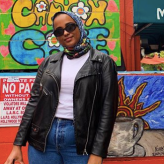 A Talk With Sam Carr